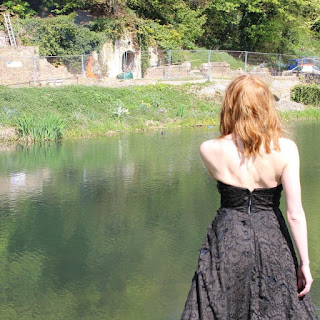 I never felt at home in the United States, where I was born and grew up. I felt at home in my parents’ house, when I danced or skated, at university and in Philadelphia’s theatre community, but never fully in the culture at large. My sense of humour didn’t work there. People often didn’t “get” me. They asked me what was wrong a lot. When I was a child, I used to sit in the park not far from my parents’ house and face East, as if through regular performance of this ritual, I could will myself across the ocean, to Europe, where I had never been.

When I first lived in a European country - the Czech Republic in 2005/2006 - I experienced a transformation in my wellbeing and sense of self. I began to dismantle the toxic association of a person’s wealth with their intrinsic value as a human being. I learned delayed gratification. I felt sexier than I ever had in the United States. I made dear friends who shared my values and encountered art that inspired me to make the work I have gone on to make. My parents came to visit me and said they had never seen me so happy and so well.

My move to the UK was not so charmed. I found great love and dear friends. I experienced, at the end of the Blair administration, a healthier relationship between the citizen and the state than the one I had grown up with, where a poorly-timed health crisis could mean financial ruin. While I eventually fell in love with London and the international community of friends I made there - many from the EU - I struggled on a personal level with Englishness, with resistance to the sort of emotional authenticity that is a big part of my understanding of integrity, with a toxic combination of arrogance and insecurity and, politically, with a system that more and more came to resemble what I had left in the United States.

Still, like many immigrants, pragmatism prevailed and I pursued British nationality. For me it was always actually EU citizenship I was pursuing - the right to live and work across the European Union, particularly in the Czech Republic, which was always my refuge from the UK and is once more my main home. As I was reminded yesterday in a journey that took me through three EU countries into one that would like to join, rarely do I feel more myself than when on the move in this way, grasping at remnants of languages akin to ones I know, revelling in the electric mix of the familiar and strange and my right to all of it, my right to be there, to live in it, to share that space.

I appreciate that I retain a significant degree of privilege in this situation and my heart breaks for those who will be impacted negatively by what follows and will not be as able as I am to access alternatives. There will be much work to be done, but today, it’s personal. Today, it feels important to say - to England especially - that I have not lived my life for you. If you thought it was ever about you, you’ve misunderstood me. It was always about that space, that freedom, the idea of a progressive alliance that respects difference and embraces complexity but says that fundamentally we all win more when we collaborate. England, your attention and consecration can feel wonderful, but you’ve caused me to doubt myself, to fear, at times, the sound of my own voice. To question, at times, the validity of my own experience. With the act of self-harm you commit today, you are demonstrating values which run counter to everything I believe.

Just so we’re clear, you’re not the hill I want to die on. The most important words on my red passport have always been European Union. That’s where I dreamed of being when I sat on that hill in Palmyra, Pennsylvania. It was never, never, never about you. It was always this beautiful more, where I hope always to be welcome.

Popular posts from this blog

June 29, 2020
Originally posted on Facebook, 9 April 2020 Over the past weeks, I’ve read a number of posts and articles suggesting that the arts sector - the performing arts in particular - should use this time to stop. These posts have not sat well with me, but they have been accumulating and seem to have considerable traction. I have avoided too much engagement with them on the grounds that a) I think we all need to go easy on ourselves and each other right now and b) perhaps selfishly, I wondered if the response they provoke in me is a personal reaction to what I perceive (perhaps unfairly) as judgement of my own decision not to down tools at this time. Last night, I decided to spend some time digging into what exactly I think about this and why. In this post, I want to share what I uncovered.  Note before proceeding: I am not at all addressing the decision of individual artists or groups to use this current interregnum however they see fit. I do not wish to endorse a culture of “shoul
Post a comment
Read more

The I-Ching and the aesthetics of shimmer

October 12, 2017
Because sometimes you find yourself sitting in a cafe with a copy of the I-Ching to your left and it’s in Polish. But you’ve seen it here before - not in this cafe, but in this city. In English, the last time, at a significant moment, even if proffered by an untrustworthy individual. It came, that time, at a moment of needing to trust. It came back the summer before last, in the wake of a decision that was in some ways good and an in others bad. A gently insistent reminder to attune to The End in Sight.  I ask myself what hexagram is that? I can’t remember. Can I find it? Will I recognise it in Polish? 64. Przed Spełnianiem. Koniec Przed Spełnianiem.  When things flow, there’s a sense of continuity and overlap - coexistence of time/space. I feel forward and back, accumulated experiences shimmer. I’m attracted to this aesthetic of shimmering lately. I see it in my head as a collection of loosely woven baskets, which sit inside of one another. Their weavings cross and contradict
Post a comment
Read more

Because we don't work in a vacuum.

October 18, 2017
by Becka McFadden So this blog is about performance and perhaps this is a semi-hijack. Though perhaps not. Once, not so very long ago, I did a PhD grounded in the sociology of theatre and performance. The fundamental premise of this school of thought - unsurprisingly - is that what we do on stage is not distinct from what is happening in the world. Making art, we both respond to and co-create the social world in which we continue to live, love, vote, pay taxes and make more art. A brief anecdote by way of illustration. During the dark days (though how comparatively luminous they seem in retrospect!) of George W. Bush's run for re-election, I was doing my MA in Theatre. Our programme was organised such that you could hold an almost fulltime-time job and still do it, as a result of which our classes started around 4:30 and rehearsals often continued past midnight. The night of the election coincided with a significant rehearsal of a political twentieth century European play that
Post a comment
Read more