notes to self: a glossary for what i do

January 29, 2018
So it's a season of - among other things - digging through piles of digital detritus in search of old workshop plans. I hate doing this kind of thing. I do almost anything to avoid it. I do this because as long as I don't actually look into my archives, I can delude myself into thinking that they exist.

There is something perversely paradoxical in my seeming inability to organise things properly. It's enough to think 'this is quite good, I should make sure to keep it' and then all hope of actually doing so is gone. I don't know how to ratify my allergy to proper record keeping with a simultaneous and contradictory need to assert my presence on the world.

That's a big tug and pull for me.

I want to leave foot prints, so long as my feet aren't artificially weighed down. I want to wear a groove, but only the kind that allows for divergence.

So yeah. Whatever that's about, my (lack of) record-keeping is a physical manifestation of it. Happily, the disorder is accompanied by amnesia and a good deal of serendipity. I probably don't have what I'm looking for, but I do have other stuff, like this, to share.

This particular this is a glossary of practice I wrote last year,  as a means of deciding whether or not it was worth asking others to do it in a workshop setting. I found it this afternoon, over a year later. 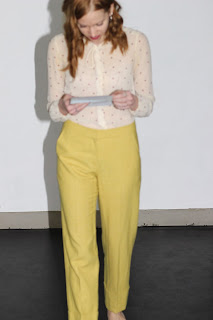 Wink: The desire that the work avoid taking itself too seriously; a reminder to endeavour always to approach Chekhov in the sense of laughing because otherwise we’d just all kill ourselves; a rejection of the kind of high-brow pretension that makes us scared to speak among colleagues; a revelling in absurdity, while still embracing caring as a good.

Run(ning) towards complexity: The work’s resistance to anything too easy, to reductive, too neat.

The why: Something which must always be answered. The principle of curation. The litmus test. The engine.

Specificity: Actually something - the principle that something genuine/actual is actually more communicative than a bunch of apologetic generals.

It’s for them: A reminder to give it away, a reminder that it’s not for/about me.

Some additions from the last year:

It's all part of the same thing: A reminder that there's an element of choice in the creation of internally divisive walls. I'm not working against myself, if I understand the interconnectedness of all things, even those I dislike. There's value in knowing what I'm not.

Auto- : A prefix of agency, learned from Sonia Gomez. What I have. What I can do with it. What is at my disposal. There's always something.

Popular posts from this blog

Because we don't work in a vacuum.

October 18, 2017
by Becka McFadden So this blog is about performance and perhaps this is a semi-hijack. Though perhaps not. Once, not so very long ago, I did a PhD grounded in the sociology of theatre and performance. The fundamental premise of this school of thought - unsurprisingly - is that what we do on stage is not distinct from what is happening in the world. Making art, we both respond to and co-create the social world in which we continue to live, love, vote, pay taxes and make more art. A brief anecdote by way of illustration. During the dark days (though how comparatively luminous they seem in retrospect!) of George W. Bush's run for re-election, I was doing my MA in Theatre. Our programme was organised such that you could hold an almost fulltime-time job and still do it, as a result of which our classes started around 4:30 and rehearsals often continued past midnight. The night of the election coincided with a significant rehearsal of a political twentieth century European play that
Post a Comment
Read more

June 29, 2020
Originally published on Facebook and Instagram, 31 January 2020 photo: Paul Wade I never felt at home in the United States, where I was born and grew up. I felt at home in my parents’ house, when I danced or skated, at university and in Philadelphia’s theatre community, but never fully in the culture at large. My sense of humour didn’t work there. People often didn’t “get” me. They asked me what was wrong a lot. When I was a child, I used to sit in the park not far from my par ents’ house and face East, as if through regular performance of this ritual, I could will myself across the ocean, to Europe, where I had never been. When I first lived in a European country - the Czech Republic in 2005/2006 - I experienced a transformation in my wellbeing and sense of self. I began to dismantle the toxic association of a person’s wealth with their intrinsic value as a human being. I learned delayed gratification. I felt sexier than I ever had in the United States. I made dear friends w
Post a Comment
Read more

December 15, 2014
by Mary Ann Hushlak Backstory – where to begin?  Behind us, most certainly. Yet in terms of when, when to start from? Yesterday, last week, a month ago, a year ago, several years ago, most of a life?  Or from a particular event?  A particular something?  Or a very specific place? Even as we say the word, our heads raise and tilt ever so slightly backwards. In fiction, backstory is about how a character gets to be like that, or does that, whatever the that of the story is. In real life, it’s more how each of us can be fathomed, can be understood, can be contextualized, can be tracked, how our bodily reactions and inner thoughts penetrate our actions, our gestures, our tone -  right now, in this moment.    Backstory is of course about time, time past, what is behind us and what we carry with us. Remnants, vestiges of habits, rituals, mementos as much as memories, crucial moments, scars, wounds, phobias and history. All of the remnants, through time and, also, through space. Like a
Post a Comment
Read more